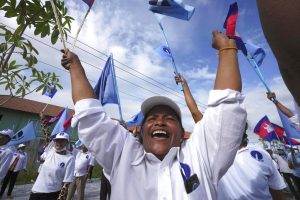 A supporter of Candlelight Party waves flags before marching during an election campaign for the June 5 communal elections in Phnom Penh, Cambodia, Saturday, May 21, 2022.
Credit: AP Photo / Heng Sinith

Almost all of the observers of the local or communal elections held in Cambodia on June 5 have spoken of a “crushing victory” for Prime Minister Hun Sen’s Cambodian People’s Party (CPP) and a heavy defeat for the opposition. I would like to give another interpretation of the results, starting with an exercise in political logic.

Imagine the case of a political party with the following characteristics:

What chance would such a party have in an election held on a national scale? Logically, none.

This party really exists in Cambodia. It’s called the Candlelight Party (CLP). But the result that it achieved in the June 5 commune elections was very different to what might have been expected.

Though it might be considered clinically dead, the CLP scored 22 percent of the popular vote and became Cambodia’s second largest party, despite an electoral system open to all kinds of manipulation at the expense of the opposition. Even more surprisingly, the 1.6 million votes which the party received represents an increase of 30 percent compared with the score it achieved 10 years ago in a similar communal election in 2012, before the party was mothballed. The CLP has therefore done more than simply “rise from the ashes” as the fire is continuing to burn in the form of continued political repression.

In order to try to survive and progress under a repressive regime, the democratic opposition has often had to change its name. I founded the first parliamentary opposition party in 1998. I had to call it the “Sam Rainsy Party” (SRP) so that its name could not be stolen, as was the case with the Khmer Nation Party. I set up the KNP in 1995 and its name was pinched by Hun Sen’s supporters during the coup d’état which he fomented in 1997.

The SRP saw its popularity increase from election to election until it merged with the Human Rights Party (HRP) in 2012. Even if the HRP only had three national assembly deputies versus 26 for the SRP, this merger created a strong synergy for the democratic opposition. , which was united for the first time under the banner of the Cambodia National Rescue Party (CNRP). The new party won 55 deputy seats in the legislative elections of 2013, with 44 percent of the votes, despite serious irregularities in favor of the ruling party.

Even though the SRP merged its leadership, resources, political machinery and its electorate with those of the HRP, it was not dissolved, as the empty shell which it represented was still useful to hold onto the posts of senators who had been elected under its banner. .

In September 2017, in the face of ever worsening political and judicial harassment, especially the targeting of me as a “convict,” the SRP had once again to change its name and became the CLP. The new name was chosen to recall the fact that the SRP’s logo was represented by a candle. This empty shell became useful for another reason: it created a new banner for democratic forces that were traumatized and disempowered after the dissolution of CNRP in November 2017. This need for a new legal entity became pressing at the end of 2021 to allow preparation for the commune elections held this June.

The resurgence of the CLP has redrawn Cambodia’s political map. The single-party system ushered in by the arbitrary dissolution of the CNRP, the only parliamentary opposition party, in 2017, was breached at the local level by the CLP, which officially won 18 percent of the commune seats. This gives impetus for the ending of the single-party system at the national level, as the opposition in the shape of the CLP is likely to be again represented in the national assembly after legislative elections scheduled for July 2023. An official CPP report which extrapolates the latest results predicts 21 out of 125 seats for the CLP in the national assembly in 2023, and nine out of 58 seats in the Senate in 2024.

The score obtained by the CLP in 2022 and the new political landscape it has created put it in a key position to push for a reform of the electoral commission in order to ensure more transparent polls in the years to come.

I predicted this resurgence of the opposition under a new banner and its political impact in a recent article for The Diplomat. I was and remain convinced that the arbitrary dissolution of the CNRP by Hun Sen was a piece of self-deception. As I wrote then, “No dictator can simply cancel the desire of a whole people for democratic change at the stroke of a pen.”

Of course, the CLP scored “only” 52 percent of the votes achieved by the CNRP in the communal elections of June 2017. Given the difficulties and obstacles faced by the opposition, transferring 52 percent of the CNRP’s support to the CLP after only a few months of preparations represents a remarkable performance.

As noted above, the CLP was simply an empty shell until a few months before the vote. Its re-activation – decided as a last-minute solution by an opposition blocked on all fronts – immediately prompted severe repression. On June 2, three days before the elections, the United Nations Human Rights Office It was “disturbed by the pattern of threats, intimidation and obstruction targeting opposition candidates,” adding that “The Candlelight Party, in particular, faces a paralyzing political environment.”

But the biggest difficulty for the CLP is its lack of means of communication. How to explain to CNRP’s old electorate the opposition’s tactical changes in such a short time, and to ask for a transfer of support to CLP when all the 20+ television channels are controlled by the ruling party, which is using Chinese technicians to also limit internet access on the Chinese model?

With the end of the one-party system Cambodia is returning to the path of “liberal and pluralist democracy” as stipulated in the Paris Peace Agreements of 1991.

By contributing to the organization of real, fair, and free elections in 2023, the international community of democratic nations can help democracy effectively take root in Cambodia. Only democracy can guarantee Cambodia’s independence and neutrality which, in the context of rising tensions in the South China Sea, will be a factor favoring regional peace and stability.