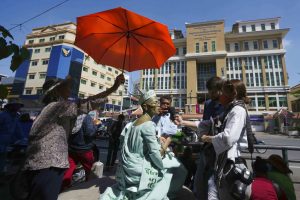 A court in Cambodia’s capital today sentenced 31 opposition activists to lengthy prison terms for incitement and plotting against the long-ruling government of Prime Minister Hun Sen, as police arrested a prominent Cambodian-American activist protesting the verdicts.

The 31, all of whom were connected in some way to the disbanded Cambodia National Rescue Party (CNRP), were sentenced to between five and eight years in prison on unsubstantiated charges of “incitement” and “conspiracy.” Twenty-seven of the 31 were sentenced in absentia, among them the exiled CNRP leaders Sam Rainsy, Mu Sochua, Eng Chai Eang, and Ho Vann. A further 20 defendants were found guilty, but had their sentences suspended.

The proceedings involved one of two mass trials of some 138 former CNRP officials and supporters, who have been charged in connection with an attempt by Sam Rainsy to return to Cambodia in November 2019 and lead mass protests against the Cambodian People’s Party (CPP) -led government. Prosecutors claim that this amounted to an attempt to launch a “color revolution” aimed at toppling the CPP administration.

The first mass trial against former CNRP members in March saw the court convict 20 politicians and activists, as well as one defendant’s relative, on a range of charges and sentence them to between five and 10 years imprisonment.

Today’s sentences were attended by protests outside the Phnom Penh Municipal Court, during which police swooped on Cambodian-American Theary Seng, a veteran civil society activist and longtime critic of the Hun Sen government.

Theary, one of those convicted in the mass trial, has taken to attending recent court hearings in elaborate costumes in order to highlight the point that the proceedings are mere political theater. Today, she came dressed as Lady Liberty, complete with torch and broken chains; Previously, she showed up to court in an orange prison uniform and as Lady Justice, complete with scale and blindfold.

According to the local media outlet Voice of Democracy, one of the few independent news outlets to survive the crackdown of the past five years, Theary was arrested at around 10 am, while protesters “scuffled with officers over protest banners, getting dragged into the street . ” Her arrest was captured on a livestream conducted by the environmental activist Chhoeun Daravy.

Theary’s arrest is likely to court further friction with the United States, after a week in which the Washington foreign policy establishment hyperventilated about Cambodia’s close relationship with China – particularly the possible establishment of a Chinese military presence at the country’s Ream Naval Base.

US Ambassador W. Patrick Murphy tweeted after the verdict that the embassy was “deeply troubled by today’s verdict against Seng Theary. Freedom of expression and association, and tolerance of dissenting views, are vital components of democracy. We call on Cambodian authorities to release her and other human rights activists from unjust imprisonment. ”

The two mass trials have served the function of mopping-up operations for the CPP, following an extended political crackdown. In the 2013 national election, the CNRP, a unified opposition party founded the year before, came close to besting the CPP. When the party repeated the feat at local elections in mid-2017, Prime Minister Hun Sen’s government outlawed the CNRP, driving most of its senior leadership into exile, and arrested its president Kem Sokha on charges of treason. (His trial remains ongoing; the previous CNRP president Sam Rainsy was driven into exile in late 2015.)

Today’s sentences also provide important political context for the commune and sangkat elections that were held on June 5. While the CPP won 9,338 out of the 11,622 contested commune council seats, according to provisional results from the National Election Committee (NEC), the elections were characterized by a greater degree of openness than the last national election in 2018.

After that poll saw the CPP win all 125 seats in the National Assembly, the authorities have permitted the reemergence of the Candlelight Party (CLP), the latest incarnation of the opposition party founded by Sam Rainsy in 1995. Despite widespread intimidation and dearth of resources , the CLP managed to win 2,119 council seats at this month’s polls, suggesting that the country had returned to a two-party system possessing at least some basic democratic characteristics.

The government’s continuing persecution of former CNRP activists and politicians sentences suggest that while it is possible to see a silver lining to the commune election, the return of a political opposition in the guise of the CLP was very much an indulgence of those in power. The CPP government prizes competitive elections – but only up to a point.