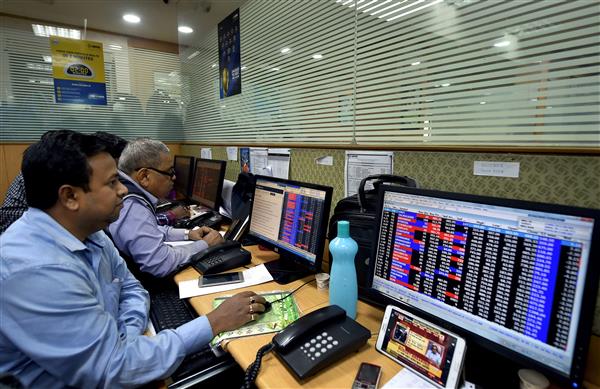 Benchmark indices stayed on the backfoot on Tuesday after the previous session’s routine as risk-off sentiment prevailed amid weak global cues and persistent foreign fund outflows.

Global investors were in wait-and-watch mode ahead of the US Federal Reserve’s policy decision on Wednesday amid expectations of accelerated rate hikes to cool scorching inflation, they added.

In value terms, Reliance Industries and the HDFC duo accounted for the most of the benchmark’s losses.

On the other hand, Bharti Airtel topped the gainers’ list with a jump of 1.63 per cent. NTPC, UltraTech Cement, M&M, Infosys, Dr Reddy’s and L&T were among the other gainers, climbing as much as 1.61 per cent.

“Domestic market restrained from heavy sell-off as CPI data moderated on a month-on-month basis and this had a calming down effect amidst global volatility.

Retail inflation eased to 7.04 per cent in May, mainly on account of softening food and fuel prices as the government as well as the RBI stepped in to control spiraling price rise by way of duty cuts and repo rate hike, as per official data released after market hours on Monday.

However, wholesale price-based inflation surged to a record high of 15.88 per cent in May as crude prices rose and heatwave brought about a spike in prices of vegetables and fruits, strengthening the possibility of a further interest rate hike by the Reserve Bank.

“Markets ended marginally lower in a volatile trading session, in continuation of the prevailing trend. After the soft start, the benchmark made multiple attempts to recover but selling pressure in heavyweights capped the upside till the end.

In the broader market, the BSE smallcap gauge fell by 0.40 per cent and the midcap index dipped 0.16 per cent.

Elsewhere in Asia, markets in Seoul and Tokyo ended lower, while Hong Kong and Shanghai bounced back and settled in the green.

Staging a marginal recovery from its lifetime low, the rupee inched up 1 paisa to close at 78.03 (provisional) against the US dollar on Tuesday amid a weak greenback overseas.

Foreign institutional investors (FIIs) remained net sellers in the capital market, as they sold shares worth Rs 4,164.01 crore on Monday, as per exchange data.