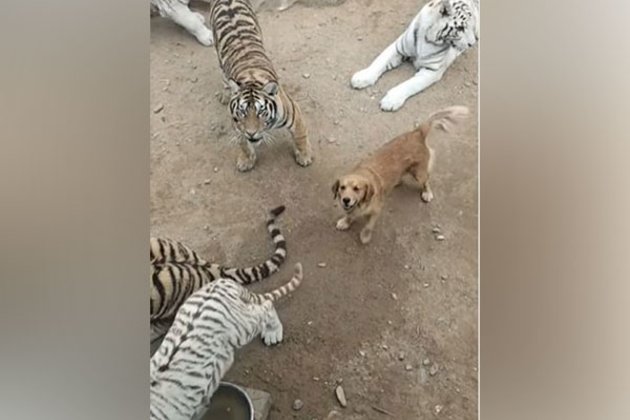 Have you ever seen a dog roaming among tigers fearlessly? See this video

New Delhi [India]June 15 (ANI): A viral video of a golden retriever roaming fearlessly among tigers will definitely help you unleash your courageous side while facing the odds in life.

Recently, an Instagram handle with ‘Tiger Bigfan’ shared a video in which a dog is seen walking in the midst of huge 6-7 tigers.

Surprisingly, the tigers did not hurt the little dog and let him bark in front of him.

The video was captioned, “It’s not easy for the dog mother to raise several tiger children”.

https://www.instagram.com/p/CeATZ8wl54d/As soon as the video was posted, viewers chimed into the comment section and hailed the dog’s bravery.

One user wrote, “That dog helped raise those tigers and fed them with her milk. They are unlikely to hurt the dog. It’s possible but unlikely,” Another user wrote, “The real tiger is only one here”.

A funny comment dropped by a user, “They really said” stop talking to my mom “.

The users bombarded the post with their quirky comments, “Great how the momdog immediately checks up on the tigers that have a” moment “there in the middle.” Stop it Steven! Same for you Mindy! Don’t give me that sas! “The cute yet courageous video of the dog has received over 54,000 likes so far. Also, it has been viewed by more than 1.2 million people. (ANI)