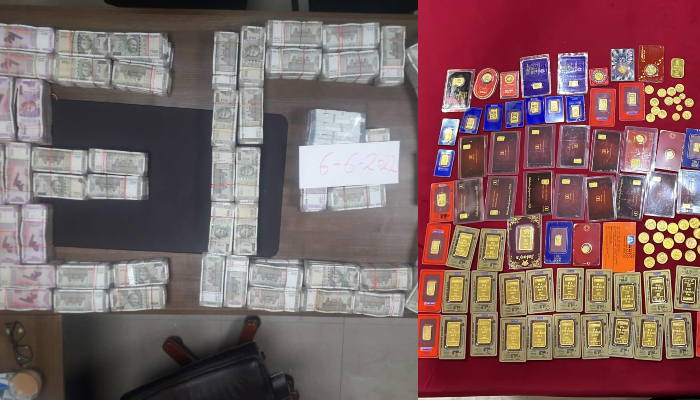 A day after conducting raids at the residence and other locations linked to Aam Aadmi Party leader and Delhi Minister Satyendra Jain, the Enforcement Directorate officials on Tuesday recovered bundles of hard cash, gold coins and biscuits from Jain’s premises.

According to the reports, the ED has recovered Rs 2.23 crores of cash from Ram Prakash Jewelers, Rs 41.5 lakh from Vaibhav Jain and Rs 20 lakh from GS Matharoo. Along with hard cash, 133 gold coins weighing 1.8 kgs have also been recovered from Vaibhav Jain. Notably, the ED also recovered various incriminating documents and digital records from the premises of Satyendar Jain and his aides. Jain is currently in ED’s custody till June 9 in connection to the money laundering case involving a company from Kolkata.

ED has conducted searches on 6.6.2022 under PMLA, 2002 at the premises of Satyendar Kumar Jain and others. Various incriminating documents, digital records, cash amounting to Rs. 2.85 Crore and 133 gold coins weighing 1.80 kg in total from unexplained source have been seized. pic.twitter.com/WYSDPkPrXN

The ED yesterday conducted raids against Jain as part of a money-laundering probe linked to an alleged hawala dealings case being conducted against him. The officials stated that the raids, including that at the residential premises of Jain in Delhi and other locations, were being conducted as part of a follow up in the case. On May 30, Jain was arrested by ED under the provisions of the Prevention of Money Laundering Act. He was sent to ED’s custody by the trial court on May 31.

Earlier, the trial court had allowed the presence of a lawyer during the interrogation. The lawyer was allowed to be present at a distance from where he could not listen to anything but could see what was happening. However, the Delhi High Court stayed the order. The Judge had reserved the order on the ED’s plea challenging the direction. The Judge said there was no FIR or complaint against the minister, Jain could not claim the right of a lawyer present during the recording of the statement.

It is important to note that Delhi CM Arvind Kejriwal has time and again defended Jain as an honest person and had said that he is being framed in a false case. CM Kejriwal said in a press conference that he had himself examined the case against Jain and that it was ‘fake’. He said, “I have studied the case against Jain. It is completely fake and motivated by political reasons. We have faith in the judiciary. Jain is following the path of truth, and he will come out clean. ”

The case against Satyendra Jain

In August 2017, the Central Bureau of Investigation (CBI) filed an FIR against Satyendra Jain in a money laundering case. The ED had registered a criminal case against the AAP leader based on this FIR which was lodged by the Central Bureau of Investigation (CBI) in which it had been alleged that Jain could not explain the source of funds received by four companies in which he was a shareholder. The companies have reportedly laundered money to the tune of Rs 16.39 crores from 2010 to 2014.

In November 2019, the Home Ministry approved the prosecution of Delhi minister Satyendra Jain in cases related to disproportionate assets and money laundering. In April this year, the Enforcement Directorate provisionally attached immovable properties worth Rs. 4.81 crore owned by companies named Akinchan Developers Pvt. Ltd, Indo Metal Impex Pvt Ltd, and others under the PMLA, 2002. The action was taken in connection with the disproportionate asset and money laundering case registered against AAP minister Satyendra Jain, his wife Poonam Jain, and others.