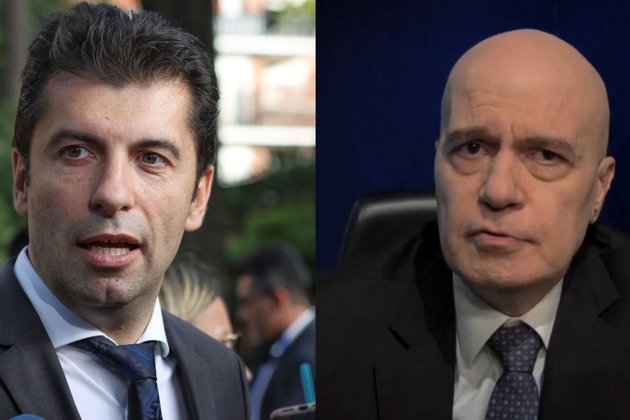 But what else do you expect when high inflation, a relentless pandemic, and the threat of being dragged into a regional war are compounded by a fourth factor?

Last week, Slavi Trifonov announced that his party, There Is Such A People (ITN), was withdrawing from the 6-month-old governing coalition. He cited alleged policy failures over North Macedonia, whose EU bid has been blocked by Sofia over ethnocultural issues, and insufficient funding for infrastructure.

But the results will be felt elsewhere and, in the midst of multiple global crises, Bulgaria is stumbling toward a political turning point.

Prime Minister Kiril Petkov’s government has not fallen, but its parliamentary support has been eroded enough that it’s only a matter of time before it does.

Whatever happens in the next several days or weeks, a few things are certain: Bulgaria is slowing on its path toward adoption of the euro currency, hopes of improving relations with North Macedonia are fading, and the goals of a functioning anti-corruption commission and judiciary reforms will remain unmet for a while.

All of this is set against a backdrop of actions that would have been unthinkable under any Bulgarian government in the previous 20 years. Earlier this month, Bulgaria denied overflight rights for Russian Foreign Minister Sergei Lavrov’s planned visit to Serbia and remained loyal to EU sanctions, enraging Moscow. Weeks earlier, state-owned Russian monopoly Gazprom cut off gas supplies to Bulgaria after Sofia refused Moscow’s demand for payments in rubles, in breach of those contracts.

But none of that sparked a crisis since the Bulgarian government is currently negotiating alternative gas supplies and completing an ‘interconnector’ pipeline with Greece that could help eliminate Bulgaria’s dependence on Russian natural gas. And despite calls from some politicians for negotiations or concessions to Moscow, Petkov’s government has ruled out any possibility of a new agreement with Gazprom after the current deal expires later this year.

That might have not sat well with some members of ITN. Deputy Energy Minister Plamen Danailov told Euronews Bulgaria TV in remarks widely quoted on June 11 that his ITN party had demanded on a ‘more balanced approach’ and a postponement of any categorical rejection of Russian gas supplies. Later, Energy Minister Alexander Nikolov, also of ITN, dismissed the notion that such objections were behind the party’s decision to quit the coalition. But some lawmakers from Petkov’s We Continue The Change party have already taken to social media to refer to their outgoing ITN coalition partners as the ‘people of Gazprom,’ and Transport Minister Nikolay Sabev asked, ‘Is a Gazprom coalition cooking?’

The ITN moves will either weaken the government’s ability to pursue alternative energy sources to break Bulgaria’s dependence on Russian gas or lead to a new government with new priorities that might behave more accommodatingly toward Moscow.

This is arguably bad news for supporters of Bulgaria’s pro-European path.

All four of ITN’s cabinet ministers have submitted their resignations, which are contingent on their formal acceptance by the prime minister and his proposals to parliament for their replacements.

But the change has already begun.

The three remaining coalition forces are a minority in the National Assembly, Bulgaria’s unicameral parliament, and are therefore unable to enact decisions on their own. We Continue The Change (PP), the Bulgarian Socialist Party (BSP), and Democratic Bulgaria (DB) control just 109 seats, 11 short of a majority in the 240-seat legislature.

SEE ALSO: Is A Bulgarian Battalion Fighting In Ukraine Or Is It Only On Social Media?

ITN deputies have already begun voting with the opposition.

Petkov has said he expects to be able to persuade 12 ITN lawmakers to support budget amendments in time for summer pension adjustments and other urgent matters, but that is far from certain.

But on June 13, outgoing Sports Minister Radostin Vassilev announced that he and five other ITN deputies were quitting the party and are expected to support the government.

The opposition GERB (59), Movement For Rights And Freedoms (MRF, 34), and Revival (Vazrazhdane, 13) parties – together totaling 106 seats – have warned that Petkov won’t find any support in their ranks.

Employees walk through the construction site of a gas metering station, part of the planned pipeline link between Bulgaria and Greece near the village of Malko Kadievo, in March.

All of these points to one of three possibilities. Petkov’s government could stay, along with the likely complications of such an option. Lawmakers could manage to cobble together a new majority for a successful government if the Petkov government falls. Or Radev could appoint a caretaker cabinet ahead of new elections.

None of those three options is likely to persuade anyone that the political change initiated by the ITN’s defection is good news for Bulgaria’s pro-Western future.

In late May, Petkov’s government began to implement an operational plan to adopt the eurozone’s joint currency from January 2024. But that decision was made without votes from the governing Socialists or the ITN. Instead, both those parties support the adoption of the single European currency but first want to see more analysis of the potential consequences of joining.

Lawmakers from Trifonov’s ITN party submitted a proposal to suspend the plan until the National Assembly adopts an analysis of the effects of transitioning to the euro. The MRF’s deputies, on the other hand, did not reject that stance but rather demanded clarification and adoption. The Revival party has meanwhile rejected outright any support for adoption of the euro.

Photo Gallery: Bulgarians Celebrate Ancient Founders Of Slavic Script RFE / RL The day of Saints Cyril and Methodius – the creators of the precursor to the Cyrillic alphabet – was marked by large crowds and solemn religious ceremonies across Bulgaria on May 23-24. Share on Facebook Share on Twitter Share on нтонтакте Email to a Friend Share on LinkedIn

The government plan lays out specific steps for the country to clear the way for the euro, including amending laws and guidelines for banks and government institutions. Such technical work takes time. If the government slips from careful adherence to the course, the goal of January 2024 could easily be missed.

The European Commission’s most recent Convergence Report, published on June 1, says that only Croatia currently fulfills all the requirements allowing it to adopt the single currency early next year. Bulgaria still does not meet the price-stability criterion – that is, it suffers from excessive inflation – and has not yet adopted the necessary regulatory framework.

Any weakened government, or a new one that’s more skeptical of the euro, is likely to slow the process and thus prevent Bulgaria from hitting its 2024 target.

Trifonov said in a video speech to announce ITN’s pullout that ‘there are two reasons why this coalition doesn’t work and why we have no place in it: Macedonia and the fact that there’s no more money in [this] country. ‘

He accused Petkov of ‘high treason’ and of pursuing a different policy from the one approved by the National Assembly. Both accusations stem from Bulgaria’s veto since 2019 of the start of EU accession negotiations for North Macedonia.

Bulgarian Foreign Minister Teodora Genchovska, also from ITN, said she had been excluded from meetings on the topic at which Petkov discussed with European leaders possible steps to lift Bulgaria’s veto.

Petkov responded that Genchovska’s accusation was ‘fake news.’ On June 9, he met Sofia with EU Enlargement Commissioner Oliver Varhelyi, and the two forced there had been no agreement to lift the veto. Petkov added that he was working to make the European Union a guarantor of Bulgaria’s demands, including the incorporation of Bulgarians in the Macedonian Constitution, ending hate speech, and clarifying historical disputes between Sofia and Skopje. On June 11, German Chancellor Olaf Scholz reiterated that there was still no such agreement. Meanwhile, Radev said on June 10 that it was the government’s duty to ‘uphold the veto.’

In Bulgaria’s current situation, the chances of a breakthrough and an improvement in relations between Sofia and Skopje are probably slipping. The government is unlikely to find either the time or the support to continue seeking a solution on the Macedonian front.

On June 9, a bill to expand the KPKONPI’s powers was submitted to parliament. ITN deputies subjected it to devastating criticism and accused Petkov of seeking to install ‘his own Geshev.’ Lawmakers from We Continue The Change reportedly saw it as a political attack by their former partners and accused them of sabotaging the effort.

Wherever the truth lies, the result is clear: Anti-corruption reforms will be difficult to pass because the government has lost its majority. Without control of the National Assembly, they also will not be able to fill the Supreme Judicial Council, which constitutionally is the only body that can dismiss Prosecutor-General Geshev. The end of Petkov’s majority also means the end of pledges of judicial reform.

Bulgaria’s political crisis has erupted three months into Russia’s large-scale war in Ukraine. Sofia has sided with Kyiv and repaired damaged Ukrainian tanks at Bulgarian factories. The coalition Socialists’ resistance has prevented Bulgaria from officially contributing weapons, but Bulgarian arms manufacturers are exporting in large quantities to countries that support Ukraine with weaponry.

Sofia blocked the overflight by Lavrov’s aircraft and resisted Gazprom’s pressure to force it to ignore EU sanctions.

At the time, Petkov also waded into a ‘war for the border,’ as he described it. His government withdrew support for a 10-year-old deal that handed over phytosanitary inspections of food imports from Turkey to a private laboratory. The key inspection facility in question, at Kapitan Andreevo, is a gateway from nonmember Turkey into the European Union.

Lawmakers from We Continue The Change say that annual revenues of 200 million-300 million Bulgarian levs ($ 107 million- $ 160 million) are at stake.

Some officials have said the dispute stems from ties to the ITN or alleged bribe attempts, although party co-founder Trifonov has denied any connection to the inspections scandal.

The deputy speaker of the Bulgarian parliament, Atanas Atanasov of Democratic Bulgaria, has also alleged that ‘Russian special services’ are currently carrying out an’ intense operation ‘in Bulgaria’ to overthrow the government of the republic.

Whatever the specific reason for any alleged attack on the government, the big picture is unchanged: Bulgaria is making a turn, and it’s not westward.