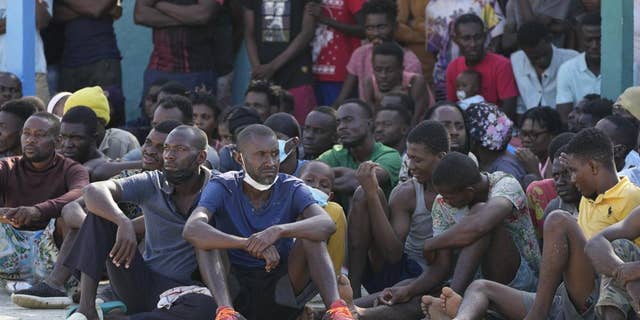 Boat with 842 Haitians headed for US ends up in Cuba

A vessel carrying more than 800 Haitians trying to reach the United States wound up instead on the coast of central Cuba in what appeared to be the largest group seen yet in a swelling exodus from crisis-stricken Haiti.

Red Cross officials in the province of Villa Clara said Wednesday that the 842 Haitians were being housed at a tourist campground. The group arrived Tuesday at Villa Blanca, about 180 miles east of Havana, and reportedly included 70 children and 97 women.

The Haitians said they called for help with light signals after being abandoned and cast adrift by their captain.

“We were on Tortuga Island for two months waiting for the trip until last Saturday, when at five in the morning they took us to the boat,” 19-year-old Joyce Paul, who arrived on the boat, told The Associated Press.

Haitian migrants wait to be processed and receive medical attention at a tourist campground in Sierra Morena, in the Villa Clara province of Cuba Wednesday, May 25, 2022.
(AP / Ramon Espinosa)

MAYORKAS WARNS BORDER NUMBERS COULD RISE FURTHER, TELLS MIGRANTS: “DO NOT COME TO THE BORDER”

In the following days, “15 people threw themselves into the sea because they couldn’t stand hunger,” Paul said. “There was a herring for (each) 15 people, and they gave us water.”

Paul was traveling with an uncle, his wife and a baby at a cost of 4,000 per person. The family said the captain abandoned them early Tuesday on a separate small boat after taking their cellphones. The ship was listing. With a flashlight, they managed to draw the attention of people on Cuba’s coast.

A Haitian migrant swings at a tourist campground in Sierra Morena, in the Villa Clara province of Cuba Wednesday, May 25, 2022.
(AP / Ramon Espinosa)

While the number of migrants on this single vessel seemed unprecedented, the US Coast Guard and other nations have reported intercepting several boats carrying well over 100 Haitians in recent months.

It is not unusual for currents and winds to carry Haitians to Cuba, which borders most of the sea path between Haiti and the US Cuba returns most of the arriving migrants to Haiti.

MODERATE DEMOCRATS WARN ABOUT ‘RECKLESS’ EFFORT TO LIFT TITLE 42, AS BIDEN ADMIN DOUBLES DOWN WITH APPEAL

A crumbling economy and a spike in gang-related violence and kidnappings in Haiti has prompted thousands of Haitians to flee their country in the past year. Human rights activists in Haiti say those fleeing believe they are safer taking the risk on an overcrowded boat than staying in their country.

US authorities say the number of Haitian migrants detained in and around US jurisdictions in the Caribbean has doubled. On Tuesday, the US Coast Guard said it stopped a sail freighter carrying 153 Haitian migrants near the Florida Keys.

Earlier this month, the Coast Guard rescued 36 Haitian migrants and found 11 others dead – all women – after a boat capsized northwest of Puerto Rico. The rescue came just days after 68 migrants were rescued in treacherous waters between Puerto Rico and the Dominican Republic, which shares the island of Hispaniola with Haiti.

In April, the US Coast Guard spotted more than 130 Haitian migrants aboard a boat near the Bahamas. A month prior, 140 migrants landed in the Florida Keys.

Haitian migrants eat at a tourist campground in Sierra Morena, in the Villa Clara province of Cuba Wednesday, May 25, 2022.
(AP / Ramon Espinosa)

US Coast Guard crews have interdicted about 4,500 Haitians since October. Many were trying to come ashore in the Florida Keys in overloaded vessels. More than 3,000 of those migrants have been found since mid-March, signaling the pace has been picking up in the spring.

Meanwhile, Cuba’s government reported a group of 292 Haitians had reached the province of Ciego de Avila in February.

Máximo Luz, a journalist with Telecubanacan broadcaster, said that “adverse navigation conditions” brought the latest group of Haitians to Cuba, where “they sought the help of border guard troops.”

The national news site Cubadebate showed images of a gray vessel packed with people and of rescue workers carrying some of the Haitians for treatment.

“They are in quarantine,” Fernández told AP, indicating that they would remain there for three to five days.

Arletys Ramos, a municipal epidemiology director, said Haitians are monitored in relation to diseases such as COVID-19, malaria and cholera, although no one among the group was seriously ill.