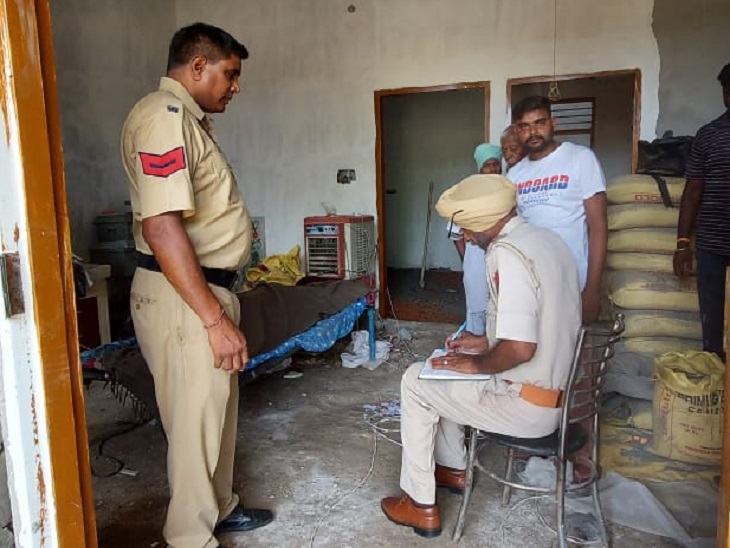 Blood-soaked body found in closed house: absconding accomplice suspected of murder in Ludhiana; used to put stones in the under construction kothi

Police officers arrived at the scene of the incident to investigate.

A person died under suspicious circumstances in the newly built colony near the drain on Kachcha Malak road in Jagraon town of Ludhiana, Punjab. His body covered in blood was found lying on the cot. The door of the room was also locked from inside. Police investigation revealed that he died due to head injury. The fellow worker is also absconding after the incident.

The owner of the house Gurvinder Singh told that he lives in a rented house at Atma Nagar along with his family. In this newly built colony, he is taking his own land and building a new house. For the last one and a half years, Umesh Sahu residents of Bihar and Ramesh Kumar were working as stone pelting in his newly built house. When he reached the house at around 8 am today with Jagdish Sahu, father of Umesh Sahu, who lived in the house, he saw that the main door of the house was locked from inside.

Both kept knocking on the door for a long time, but no one opened the door. After this, when he entered the house by putting a ladder lying outside the house, he saw that Umesh Sahu was lying on the bed covered in blood. Thereafter he immediately informed the police.

After finishing their work, they used to live in the same house. Gurvinder told that both were addicted to drinking alcohol. It is possible that while drinking alcohol, they got into a fight about something. Due to this enmity, Umesh fled from the spot after killing Ramesh Umesh Sahu.

death by blow to the head

Anwar Masih, ASI of Police Station Sadar, who came to investigate the matter, said that after getting information about the incident, he immediately reached the spot with his team. The body of the deceased has been taken into custody and sent for post-mortem. During investigation, it seems that Umesh Sahu died due to a blow to the head with a heavy object.

Due to this, a lot of blood is scattered near the mouth of his dead body lying on the cot. Police is also taking the help of dog squad and finger print experts to solve the mystery of this murder.