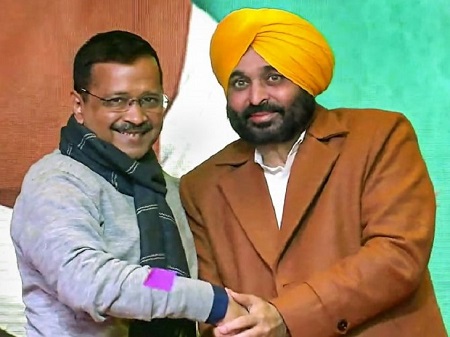 Bhagwant Mann ‘The Half CM’

Following the change of power in Punjab, Chief Minister Bhagwant Mann has been referred to as ‘The Half CM’ in the administration here over the issue of Delhi bureaucrats, but recent developments have allowed this new naming of Mann. The case seems to be that in the absence of Bhagwant Mann and Energy Minister Harbhajan Singh, Punjab Chief Secretary Aniruddha Tiwari, Power Secretary Dalip Kumar, Chief Managing Director (CMD) of Energy Corporation (Powercom) Baldev Singh Saran, Delhi Were. Minister Satyendra Jain had a meeting with Rajya Sabha member Raghav Chadha. Thus the Aam Aadmi Party had promised to provide 300 units of free electricity before the Assembly elections, now that the party has formed a government in Punjab, people have started demanding free electricity. In this regard, Kejriwal had called a meeting of the aforesaid officials of Punjab. Despite Kejriwal being the national convener of the ruling Aam Aadmi Party, the elected government in Punjab is bound by legal limits. Such a meeting in the absence of the constitutional head of state or his elected representative is completely illegal, interferes in the affairs of the state and is against the federal structure of the country.

The smell of power in Punjab has been wafting from Delhi ever since the new government took power. Former Indian Police Service Officer Kunwar Vijay Pratap Singh, MLA of Amritsar (North Zone) has lodged his protest against the change and appointment policy of his own government. He opposed the appointment of two senior officers of the Indian Police Service, Prabodh Kumar, as Special DGP (Intelligence) and Arunpal Singh as Amritsar Police Commissioner. He protested through a Facebook post. Even though he changed his position later, by then the mind was losing its place in the government as it became the headlines of the media. Kunwar Vijay Pratap alleged that in April 2021, the Punjab and Haryana High Court had quashed the probe into the unholy case by the Special Investigation Team. Kunwar Vijay Pratap was also a part of it. The team was investigating two cases of police firing on people protesting against the desecration of Guru Granth Sahib in Kotakpura and Behibalkalan in 2015. After the court order, Kunwar Vijay Pratap resigned from his job and joined Aam Aadmi Party. He alleged that both the above officials were in favor of big political families. He alleged that the two officials were responsible for not getting justice in the Bargadi-Bahbalkalan case. Although Chief Minister Mann has not commented on this, he has hinted that something is wrong with the revolutionary government of Punjab. The question arises as to how the favorite officials of the Congress government are securing their preferred seats in the AAP government today.

On the other hand, the manner in which the members were announced in the recent Rajya Sabha elections for the five seats in Punjab has also raised suspicions that the Aam Aadmi Party’s Punjab unit has done less and the High Command. AAP has fielded Jalandhar-based cricketer Harbhajan Singh, Phagwara-based Lovely Professional University vice-chancellor Ashok Mittal, party Punjab co-incharge Raghav Chadha, Ludhiana-based businessman Sanjeev Arora and Delhi IIT professor Dr. Sandeep Pathak has been sent to Rajya Sabha. Not only the opposition but also its activists on social media have accused the name of not living up to the state’s expectations. In choosing these names, the culture of high command was seen heavily on the Chief Minister of Punjab.

However, even during the Assembly elections, AAP’s political opponents accused Kejriwal of indirectly seeking control of Punjab’s politics and administration. Everyone knows that Kejriwal, like Bahujan Samaj Party President Mayawati, Bengal Chief Minister and Trinamool Congress President Mamata Banerjee, is the undeclared unicorn of the Aam Aadmi Party. Only a leader who is willing to sit on a ‘half ticket’ seat can be spoiled by being a ‘one and a half smart’ leader. Thus the short history of the Aam Aadmi Party also testifies that whether it was Yogendra Yadav or Kumar Vishwas, Kiran Bedi, Ashutosh and other leaders who also wanted a full ticket, Kejriwal showed them the way out.

As the party’s national convener, Arvind Kejriwal has every right to keep a close eye on and guide his party’s government, but within the framework of the constitution. This is the first time in the history of the country that a national leader has held a meeting with the officials of his ruling state in the absence of the constitutional head or his representative. Chief Minister Mann should have the courage to inquire from his officials as to by whose order he went to the meeting.
The country has faced a puppet prime minister for ten years and if God follows the same path, it will be a gross insult to the order of the people of Punjab. The people of Punjab want to see him not as ‘The Half CM’ but as the full Chief Minister.