Australia Has a New Government. What Should Quad Leaders Expect? TOU 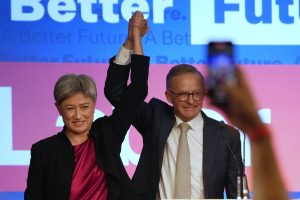 Australia Has a New Government. What Should Quad Leaders Expect?

After nine long years in the political wilderness, the Australian Labor Party won office in Australia’s May 21 national election. What should Quad leaders expect from new Prime Minister Anthony Albanese when they gather in Tokyo on May 24?

Read today, Labor’s last major foreign policy document, the 2012 Australia in the Asian Century White Paper, is sepia-toned, geared as it was to a world even then beginning to fade – one with greater hope and opportunity, and in which Australia could focus on prosperity more than security.

Australia’s external environment has deteriorated significantly since then and is widely regarded, including by the incoming government itself, as the nation’s most difficult and dangerous since the close of World War II.

Still, it is one thing to know this intellectually from the opposition benches, another to have to manage it in office. For middle powers, foreign policy in the current era is like drinking from a fire hose. And while Albanese has an experienced team around him, including incoming Foreign Minister Penny Wong, he is untried on foreign policy and was careful to stick to safe talking points during the election campaign.

There will be plenty to test the new prime minister. Australia’s sharp clash of interests and values ​​with China is keeping bilateral ties bumping along the bottom, with no high-level political engagement and no apparent end to China’s coercive trade actions against Australian exports. The new security agreement between China and the Solomon Islands is emblematic of Beijing’s efforts to chip away at Australia’s role, including as the region’s primary security provider, in the Southwest Pacific.

The incoming government appears to hope that picking fewer public fights with Beijing and trying to cool Australia’s notoriously white-hot national debate on China might help settle things a little. Perhaps. But Australia won’t concede on any of China’s principal demands, and there are any number of friction points ready to torpedo attempts to bring relations back to the point where trade can operate freely.

Beyond the immediate challenge of managing ties with China, a source of wealth for Australia even through the trade bans and the pandemic, Labor inherits a sweeping foreign and domestic policy program with two imperatives: to help support a balance of power in the Indo-Pacific favorable to Australia’s interests, and to harden Australia domestically to China’s coercive power, foreign interference, and threats to national economic sovereignty.

In recent years, Australia’s Indo-Pacific strategy and leading approaches to issues like foreign interference and the protection of 5G networks have raised Australia’s profile in Washington and its value as a partner to the United States, India, Japan, and the European Union.

Albanese should expect his fellow Quad leaders to be looking for a large measure of continuity. The new prime minister will offer reassurance. In opposition, Labor supported nearly all China-related policy measures, including the reinvigoration of the Quad and AUKUS defense technology sharing arrangement. Labor has been a strong backer of Australia’s alliance with the United States in the past, and Albanese says his government will be an energetic and trusted partner for America.

Still, for all this bipartisanship, Labor will put its own stamp on foreign policy. The party has criticized past cuts to Australia’s aid program and pledged to reverse these. It wants to put even more weight on Australia’s relations in the Pacific, and has announced a slew of new initiatives to support this. It promises to prioritize Australia’s relations with Southeast Asia, and has announced it will appoint a new senior envoy for regional affairs and ramp up political, economic and development relations with Southeast Asian partners, especially Indonesia.

All of this should comfortably align with Quad member priorities. The Biden administration will also welcome the new government’s approach to climate change and clean energy. Labor’s more ambitious mid-term target for emissions reductions (43 percent on 2005 levels by 2030) will ease the quiet frustration of the Biden team over Australia’s climate change foot-dragging.

Indeed, Labor may have to revise this target upwards. The full foreign policy impact of a large new group of independents in Parliament will not be clear for some time, but many campaigned on even more ambitious climate action and want a 60 percent reduction in emissions by 2030.

The incoming government has promised robust stance support for human rights and liberal values, and may move to sanction Chinese individuals over abuses in Xinjiang. Less clear is how attracted Labor will be to framing competition with China through a democratic lens. The new government would recognize the limits of this approach in Southeast Asia, and Wong, the incoming foreign minister, has criticized the former government in the past for reducing “our complex environment to cold war analogies.”

There will be greater change in other aspects of foreign policy. Labor’s approach to free trade agreements will be shaped in part by concerns about local jobs. It wants to take investor state dispute settlement mechanisms out of existing trade deals. And the new government will want to re-energize Australia’s non-proliferation and disarmament diplomacy.

Finally, defense looms as a major challenge. Australia wants more deterrence and long-range strike capability. But major defense programs are running overtime and overbudget. The nuclear-powered submarines promised under the AUKUS agreement are many costly and technically complex years away. The new government has said it will want a “frank assessment” of the capability pipeline and has committed to a Defense Force Posture review.

Labor also says it will keep defense spending at 2 percent of GDP. But this may not be enough, raising difficult trade-offs with the party’s strong support for social policy measures at a time of slower productivity growth, higher national debt, and a budget deeper in deficit.