ASEAN Leaders Arrive in US Ahead of Special Summit TOU 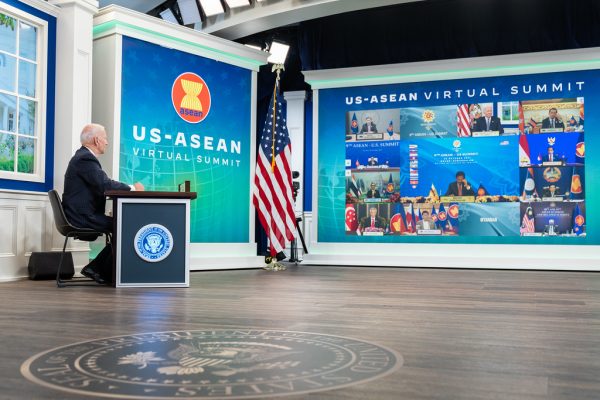 ASEAN Leaders Arrive in US Ahead of Special Summit

Southeast Asian leaders have converged on Washington ahead of the US-ASEAN Special Summit that will be hosted by President Joe Biden on May 12-13, as a sign of his administration’s commitment to the regional bloc. The leaders from the Association of Southeast Asian Nations (ASEAN) are expected to participate in a number of events hosted by Biden and other US government officials during the two-day summit, in addition to sundry other side-gigs and engagements.

The summit is the second-ever standalone meeting of ASEAN leaders on US soil following the ASEAN-US Special Leaders’ Summit hosted by President Barack Obama at the Sunnylands Center in Rancho Mirage, California, in February 2016. On this occasion, however, Myanmar’s military junta has been excluded from the event following its February 2021 coup, while outgoing Philippine President Rodrigo Duterte has opted not to attend.

Like the Sunnylands summit convened by Obama, the upcoming meet carries symbolic importance and marks a milestone in the Biden administration’s attempts to engage Southeast Asia, a region that it views as central to countering China’s rising influence in Asia.

Announcing the summit in late February, White House spokeswoman Jen Psaki said it was a “top priority for the Biden-Harris Administration to serve as a strong, reliable partner and to strengthen an empowered and unified ASEAN to address the challenges of our time.” ” Two months earlier, during his visit to the region in December, Secretary of State Antony Blinken described Southeast Asia as “essential to the architecture of the Indo-Pacific region.”

However, the reality of the administration’s engagement has been wanting in both quantitative and qualitative terms. As Susannah Patton of the Lowy Institute noted this in a thread on Twitter, the summit follows a relative dearth of contact between the US president and his Southeast Asian counterparts. While Washington has dispatched a number of senior officials on regional tours in its first 17 months in office – notable tours have been undertaken by Vice President Kamala Harris, Defense Secretary Lloyd Austin, Secretary of State Antony Blinken, and Daniel Kritenbrink, the State Department’s top diplomat for East Asia and the Pacific – direct contacts between national leaders have been infrequent.

Patton notes that the visit to Washington of Singapore’s Prime Minister Lee Hsien Loong in late March was the first by a Southeast Asian leader since 2017. She also noted that Biden has only held bilateral meetings with two of his ASEAN counterparts, Singapore and Indonesia.

This can be put down partly to the disruptions of the pandemic, but the result is that there will be a marked difference between the Sunnylands summit, which came at the end of Obama’s tenure, after he had already visited five ASEAN countries and established ties with a number of Southeast Asian leaders, and this week’s conclave, which comes 17 pandemic-disrupted months into Biden’s term. “All of this will contribute to atmospherics which will be a far cry from the optimism of Sunnylands 2016,” she wrote. “This will likely have a bearing on how far [Southeast Asian] countries are willing to go to accommodate US priorities. ”

This touches on the narrower question of which issues will sit at the top of the summit agenda. Given the extent to which it has magnetized attention in Washington, the Russia-Ukraine war will no doubt be prominent in discussions. This may involve attempts by US officials to convince Southeast Asian governments, which have mostly remained neutral over the Ukraine conflict, to stiffen their stances against Russia. This implies some delicate discussions with close US partners in the region, most notably Vietnamwhich has taken a decidedly neutral position on the conflict due to its historic ties to Russia and its reliance on the country as a supplier of arms.

How far it pushes ASEAN governments on this question will go a considerable way to answering perhaps the overriding query about the summit: whether the Biden administration can escape the trap of viewing Southeast Asia solely through the lens of its own strategic competition with Russia and China.

This has recently formed the primary fault line in US-Southeast Asia relations. As I’ve argued previously, the region has many concerns about China’s growing clout and increasingly assertive behavior, and a strong desire for continued American engagement in both the economic and security realms. At the same time, there is a large gap between how the US views the region’s governments and whether they have any real interest in a heated strategic competition between the two superpowers, let alone as many in Washington are now perceiving it: a new Cold War between a “free world” led by Washington and an authoritarian axis led by Beijing and Moscow.

However, for all the concerns prompted by its growing power and assertiveness, China remains integral to the economic future of Southeast Asia – and, as Chinese officials never tire of pointing out, to its recovery from the economic ravages of COVID-19. Any US strategy that calls for ASEAN nations to circumscribe their economic ties to China is therefore a non-starter. As Evan Feigenbaum of the Carnegie Endowment for International Peace put it in a recent interview, most countries in Asia want the main functions of US engagement to be “addition and multiplication, not subtraction and division. Those are the operations that matter. ”

Much therefore hinges on the content of the long-awaited Indo-Pacific Economic Framework (IPEF), which was announced as part of the broader Indo-Pacific strategy in February and is yet to be fully elaborated, but is expected to feature prominently at this week’s Washington summit.

Since President Donald Trump’s withdrawal from the Trans-Pacific Partnership in 2017, economics and trade have been both the greatest strength of Chinese engagement with Southeast Asia and the void at the heart of the US approach to the region. Whether the IPEF can emerge as a positive framework that responds to the needs of Southeast Asian economies, and whether, as the editorial board of East Asia Forum noted in a recent articlethe US government can avoid “contriving its economic strategy in the region as a means to achieving its security objectives,” will do much to determine whether it can fill that void.